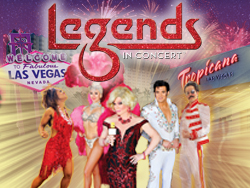 Have a favorite Las Vegas memory? No, we’re not talking about that time you ran naked through the buffet (we haven’t been able to look at mashed potatoes the same). We were actually hoping you’d mention an iconic performer, someone like Michael Jackson or Cher. Speaking of all-time great singers, Legends in Concert at Tropicana Las Vegas has an all-star lineup of tribute artists set to rip the stage.

Legends in Concert isn’t just a “tribute show,” it’s THE tribute show. And it has all the big names. Las Vegas heavyweights like Elvis Presley, Tina Turner, Rod Stewart and the Queen of Vegas, Frank Marino. Like the O.G. artists themselves, Legends takes things up a notch by adding bedazzled costumes, crazy, wild backup dancers, and an over-the-top on-stage orchestra. All of this awesomeness isn’t to take away from the fact that these performers can really sing. These are trained, talented performers and not some fools they pulled out of the local karaoke bar. So slide on into that tub of nostalgia. The water’s warm and welcoming. Those bubbles though, those aren’t us. We’re looking at you, Elvis. Grab your tickets to see Legends in Concert at Tropicana Las Vegas today.

Get Your Legends In Concert Show Tickets Here
Best Price Guarantee
Click Here For Details At Vegas.com
Performing At The Tropicana Hotel & Casino

Map Location Of Legends in Concert At The Tropicana