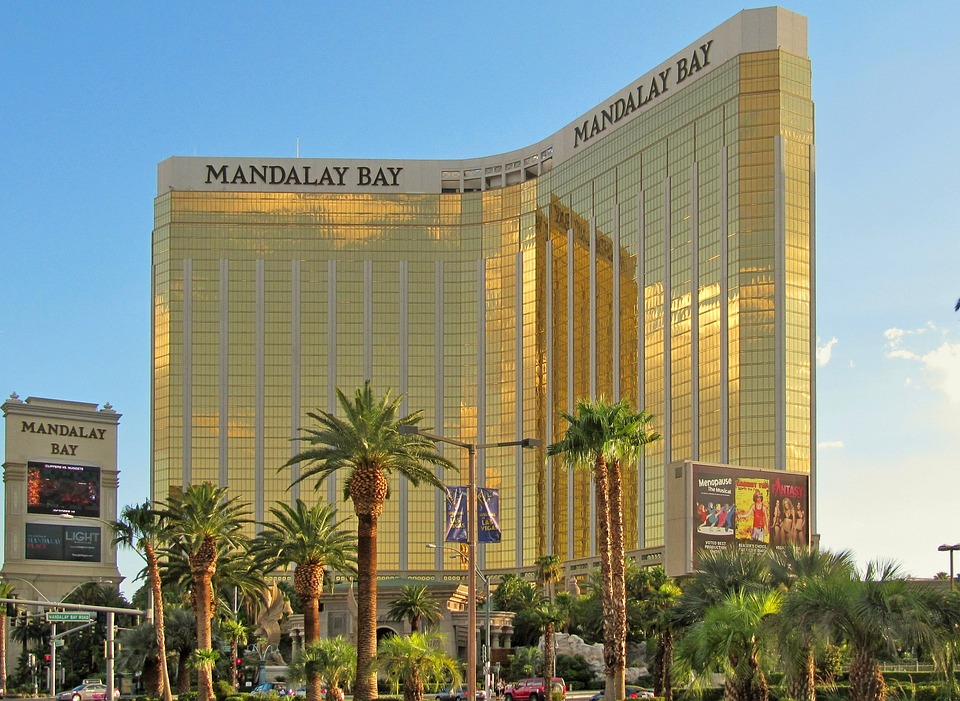 With high-profile bars, entertainment and eateries as well as shopping and golden sand, the massive Mandalay Bay tips the scales of fun to the south end of the Strip. Mandalay Bay is the premier luxury resort in Las Vegas. There is something thrilling for every vacationer to Mandalay Bay which offers personalized service, beautiful designs, fantastic Mandalay Bay pool scene, plenty of on-site entertainment, Mandalay Bay suites and amenities offering luxurious comforts.

Being a mid-range, upmarket hotel, you’ll pay more for rooms here…but don’t expect luxury amenities. The standard deluxe rooms are spacious at about 550 square feet and come with a 42-inch flat-screen TV as well as a 15-inch one in the bathroom. But there’s no refrigerator (just a minibar with sensors that charge you if you move anything). Keep in mind if you book a non-smoking room and light up in here, you’ll be charged a hefty cleaning fee at checkout. Your best bet is to smoke downstairs in the casino or neighboring bars.

If you’re looking to explore the depths of the ocean check out the Shark Reef Aquarium at Mandalay Bay that features a wide variety of reptiles and aquatic animals as well as hands-on shark and turtle feeds for an extra fee.

Michael Jackson ONE™ by Cirque du Soleil®
the Mandalay Bay features music, acrobatics and artistry with different musical styles and art forms blended together. Michael Jackson’s timeless classics are featured in this state of the art surround sound environment correographed with dancers and acrobatics.

The Shark Reef Aquarium
with 14 exhibits gives you a diver’s view through two of the walk through tunnel exhibits of over 2,000 animals inside the 1.6 million gallon tank. You will see exotic fish, sea turtles, rays, green sea turtles, piranhas, moon jellies, the rare golden crocodile and more. Interactive touch and feeding pools.

Boasting a vast beachy layout, this one-stop has-it-all (including massive convention facilities). This pool area will impress even the snobbiest of beach freaks. Called Mandalay Beach, it spans a whopping 11.5 acres. In addition to three large pools, a lazy river and tons of white sand, there’s a 1.6-million-gallon wave pool where the surf’s always up. The pool closes during winter (usually from November to February).

The cardio room at Mandalay Bay is small for such a huge resort but you’ll get a lot of exercise just from walking around.

As most people do when they come to Las Vegas, walking the Strip and enjoying the sights from casino to casino is a must part of your trip. Below is a convenient map of the Strip and distances to other casinos on the Strip from Mandalay Bay.

Map Of The Strip With Mancalay Bay Location

An ever growing collection of eating establishments are here for your choosing.

Mandalay Bay is a 43 story luxury resort and casino and complex which includes one of the towers called the Delano. Since January 2020 the property is owned by MGM Growth Properties and The Blackstone Group and operated by MGM Resorts International. The Four Seasons Hotel occupies floors 35-39 and is independently owned. Mandalay Bay has 3,209 rooms and a casino of 135,000 square feet.

Next to the Mandalay Bay is a 2 million square foot Convention Center which opened in June 2003 and the 12,000-seat Mandalay Bay Events Center.

The property was formerly occupied by the Hacienda casino. Circus Circus bought the Hacienda for $80 million dollars in 1995 and closed the Hacienda on December 1, 1996. During construction, Mandalay Bay had a serious problem of the soil sinking beneath the building. The problem was resolved when 536 micropiles, 200-foot-long metal grout filled pipes were each capped with a hydraulic jack below the building.

The resort eventually opened on March 2, 1999 to a fanfair of celebrity entertainers.

Circus Circus changed their name to the Mandalay Resort Group in June 1999.

Another tower opened on December 17, 2003 named THEhotel at Mandalay Bay.

One of the main features of Mandalay Beach is an 11-acre pool area with three heated pools, a wave pool with connecting pool for small children, and a lazy river that features a small waterfall plus a shark reef aquarium.

The Shops at Mandalay Place feature a 310 foot long shopping walkway that connects to the Luxor. There are 24 restaurants throughout the property.

The one main horrific incident involving Mandalay Bay on October 1, 2017, the shooting at the Route 91 festival, still has many nagging questions beside what has been reported that still need to be answered. How could the tent in the line of fire not show any bullet holes in it?

Why were there no marks seen on the giant pole in the line of fire? It was reported the gunman fired 600 shots in 10 minutes. A shot every second. Who was shooting on the runway as reported by air traffic control? Was the person wearing the red shoes that was escorted through the gambling area by several gunman at the Tropicana the Prince of Saudi Arabia later to be named the new King of Saudi Arabia? Helicopters around the Strip must fly counter clockwise around the Strip and not hover. Both rules were broken. What were the flashes coming out of the helicopters seen from the Route 91 festival? Were fake security guards shooting in the crowd as seen in several photos?

Location-wise, Mandalay Bay sits on the southernmost end of the Strip (it’s not in the heart of the action). Many visitors like the remote location, but if you need to get to showrooms and restaurants at other hotels, make sure you leave well in advance. If you don’t have a car, there are Deuce/RTC bus stops in front of the resort. Use those to get anywhere you want to go. There’s also a fully enclosed (and air-conditioned) walkway between Luxor and Excalibur.