If you could stuff all of Vegas under one roof, MGM Grand is big enough to accommodate that. Infinitesimally large, diverse offerings to satisfy every type of visitor. You don’t have to leave the hotel to experience many of the “bests” of Vegas. The MGM Grand Vegas is an upscale 4 star hotel and casino that opened on the Las Vegas Strip in 1993 and is the third largest single hotel in the World with 6,582 rooms. The MGM Grand features over 2 dozen fine restaurants, several live entertainment shows, huge pool complex, golf, large casino gaming floor, tropical inspired pools, full service spa, acres of shopping and excellent live entertainment. 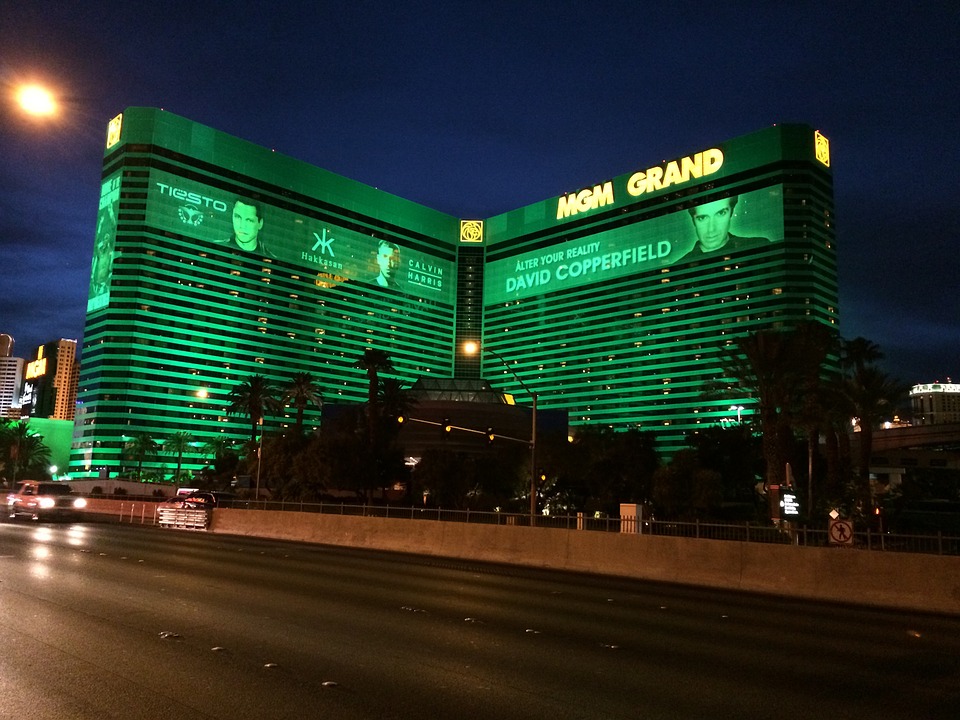 What is there to do at MGM Grand?: Help solve crime at the interactive CSI: The Experience, or may the odds be ever in your favor in The Hunger Games: The Exhibition.

America’s favorite faceless dance crew is back. Jabbawockeez rose to fame on “America’s Best Dance Crew” and has since captivated  audiences and the dance community with its unique style. In white masks and gloves, the Jabbawockeez direct audience members’ attention away from their individual identities to emphasize the dancers’ unity and to create visual representations of music. Known for their choreography, creativity and killer moves, The Jabbawockeez have won multiple awards including “Best All Ages Production” four years in a row. Their athleticism and precise rhythm have made them one of the world’s most influential dance crews. Jabbawockeez was the first dance crew to headline on the Las Vegas Strip. Their show “MÜS.I.C.” premiered at the MGM Grand in 2010. They have since performed at the Monte Carlo and Luxor. They are now returning to the MGM Grand for an unforgettable show.

As most people do when they come to Las Vegas, walking the Strip and enjoying the sights from casino to casino is a must part of your trip. Below is a convenient map of the Strip and distances to other casinos on the Strip from MGM Grand.

Map Of The Strip With MGM Grand Location

MGM Grand is home to some of the world’s top restaurants along with a stable of celebrity chefs. (Anyone heard of Wolfgang Puck, Tom Colicchio and Emeril Lagasse?)

The MGM Grand opened December 18, 1993 with a Wizard of Oz theme. An extensive refurbishment occurred in 1996 the Oz theme was the first to go. Originally there was the MGM Grand Adventures Theme Park behind the casino to make the Las Vegas Strip more family friendly. The theme park performed poorly and did not reopen for the 2001 season.

The MGM’s original entrance consisted of a giant lion’s head where you walked through the mouth of the lion. It was later changed in 1996 to what it is today, a golden looking lion statue above the entrance, because many Chinese patrons found it bad luck to walk through the jaws of a lion and avoided the hotel.

In 2006 the MGM was redeveloped as a luxury condominium and hotel complex called The Signature at MGM Grand. In June 2017, MGM Resorts International expanded the resort’s convention conference center. In January 2020, MGM Resorts announced that it would sell the resort to a joint venture.

The best way to avoid the long taxi line – which can stretch around the porte cochere on a busy night – is to take the Las Vegas Monorail. A reality about staying at MGM Grand is that you’ll do a lot of walking. You could easily rack up several miles on your Fitbit each day just by going from your room to the pool, restaurants and bars. (For those among us who are more lethargic, this may be the one time you request a room near the elevator bank.) Keep in mind every hotel room is non-smoking. Don’t risk it – that’s a pricey cleaning fee at checkout. Save yourself the trouble and smoke in designated areas only.