At Caesars Palace Casino Las Vegas, you will enjoy luxurious, top entertainment and endless Roman era experiences. As you travel throughout the massive Roman themed outlet you will witness it’s many statues and columns in the casino’s diverse environment. Caesars Palace rules over the center Strip as one of Las Vegas’s best known landmarks. Caesars Palace has been around since 1966 and we admire this Las Vegas hotel for its ability to change with the times and it’s glitz with a Greco-Roman take, meandering layout. 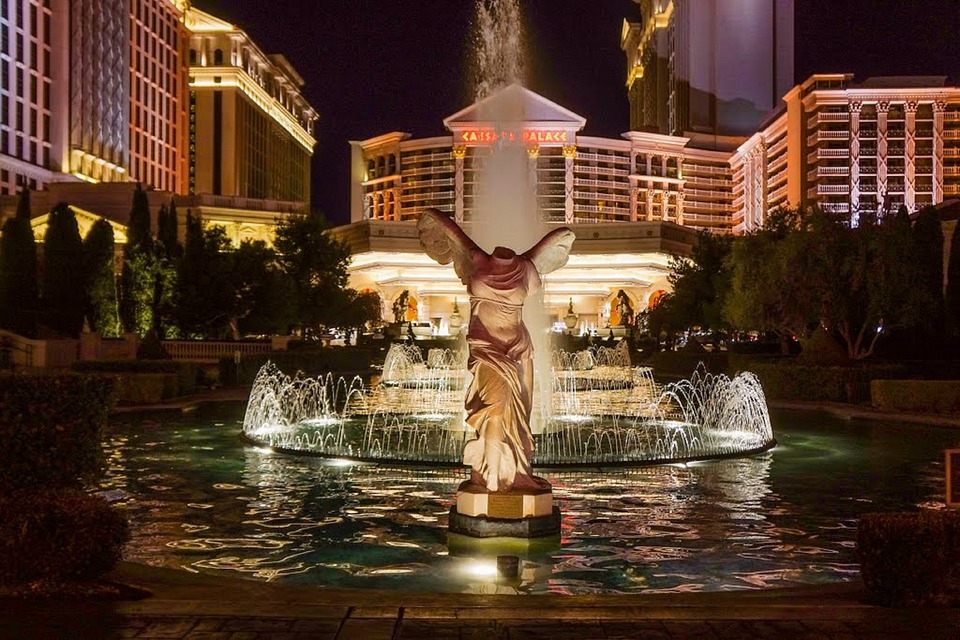 Throughout Caesar Palace’s history it has hosted many top-rated entertainers, various sporting events and the infamous Evil Knievel motorcycle jump. By constantly modernizing — from adding new Las Vegas restaurants and the world’s first-ever Nobu Hotel to bringing in star performers – this empire shows no signs of decline.

Reserve Your Tickets For Shows At Caesars Palace

Give us a time and place

If “Blue Ain’t Your Color

Caesars Palace is located on the west side and center area of
the Las Vegas Boulevard between the Mirage And Bellagio.

As most people do when they come to Las Vegas, walking the Strip and enjoying the sights from casino to casino is a must part of your trip. Below is a convenient map of the Strip and distances to other casinos on the Strip from Caesars Palace.

Cleopatra’s Barge has been a lively nightspot since it opened in 1970. What could be cooler than partying on this floating barge? When people get down on the dance floor it bobs around.

Spend an afternoon at Qua Baths & Spa. Now there are too many treatments on the menu for us to suggest just one, but what we love is that as part of your visit you’ll have access to the idyllic Roman baths, a laconium room, a tea lounge with a tea sommelier (who knew that existed?) and an Arctic ice room where – we kid you not – it snows. (You’ll thank us for sending you here during the 100-plus-degree summer months.)

Caesars Palace offers a huge number of bars, restaurants and cuisines to satisfy any taste bud. The Bacchanal Buffet does for a Vegas buffet what The Forum Shops at Caesars did to shopping – it elevates the experience (and we’re grateful for that). With a mind-blowing array of delectable dishes prepared by a team of chefs, you’ll discover small plates with things like fried chicken and waffles, red velvet pancakes and mini Wagyu sliders.

Caesars Palace is one of Las Vegas’s best known landmarks. Caesars Palace was founded on August 5, 1966 to give guests a sense of life during the Roman Empire. The resort is covered in Roman type architecture, marble white columns and Roman era type statues. Caesars Palace is owned and operated by Caesars Entertainment. The hotel has 3,960 rooms and suites in six different towers.

The resort has a large number of restaurants and cuisines to choose from. Caesars Palace is oriented to high rollers with all your favorite table games, slot machines, video poker machines and a 24 hour poker room.

Caesars Palace has been a hub for top entertainers throughout the decades through today. The Colosseum theatre hosts many of the acts which seats 4,296 people.

In one of the most memorable moments in Las Vegas history, Evel Knievel attempted to jump the Caesars Palace fountains in a motorcycle but was unsuccessful. He severly injured himself and was in a coma for 29 days after his attempt. His son, Robbie, on April 14, 1989 successfully completed the jump.

In 1970, new owners laid the groundwork for the expansion of the hotel complex at Caesars Palace.

The Forum Shops at Caesars opened in 1992 as a main attraction as an extension wing of the main hotel and casino. Strategically placing one entrance to the high end shopping district on the Strip guaranteed a healthy flow of visitors. Another renovation was completed on October 22, 2004.

Speaking of walking, make sure you valet park at the hotel’s main entrance when you arrive to check-in because the distance from the parking garage to the registration desk feels like a hike to Rome.

Navigating the ground floor of Caesars Palace – considering everything the resort has to offer and its winding layout – is a challenge. Hopefully, you’ve been doing some endurance training… just kidding, but be prepared to walk a lot. And because this place is so big, expect waits during peak times for checking in or out as well as for staff to get to your room if you should need something cleaned or fixed.